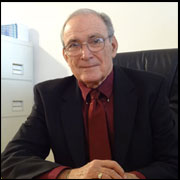 Joe Steckler is a tireless champion for Seniors along the Space Coast of Florida.  Today, at 86, and having bounced back from a major stroke at age 82, (he insisted on filming his recovery for TV in order to inspire others facing similar challenges), Joe leads the Florida non-profit organization, Helping Seniors of Brevard, formed in 2011, to new levels of Community Service.

Joe is a familiar face and a long-term effective advocate for Seniors in Brevard County.  He came to our area after retiring, with the experience he gained at his last post in the U.S. Navy, being responsible for the Navy’s Retirement Home in Gulfport MS.  That was nearly 25 years ago, and Joe still has yet to discover how the word “retire” applies to him.

He is known for establishing the Brevard Alzheimer’s Foundation, building its initial endowment, and, to this day, the Joe’s Club locations, named after him, are known as a positive and welcome resource to many families throughout the County.  Joe also ran the first Americorps Project Elderserve program in the state and trail blazed the new Florida Project R.E.L.I.E.F. program. He established a $2 million endowment.

Not content to retire from his retirement from the Brevard Alzheimer’s Foundation, Joe organized Helping Seniors of Brevard in 2011 and has tirelessly and relentlessly worked to broaden his reach for good for ALL seniors in our area.  If anything, Joe has accelerated the pace, as demonstrated in the review of Helping Senior’s efforts over the past 12 months.

Joe has established the Helping Seniors Offices and created a Senior Information Hotline to assist Seniors throughout Brevard County.  Since then, Helping Seniors has already managed more than 1000 individual cases at no charge to those helped.

He founded the interfaith caregiver respite program as part of his lay pastoral ministry work, ultimately receiving the Diocese of Orlando Lumen Gentium Tribute recognizing the national repercussions of his service to seniors.  Mr. Steckler also was awarded the “Crown of the Good Name” by Temple Beth Shalom (the first ever given to someone outside the Jewish faith) and has received the Florida Council on Aging “Super Senior” and “Senior Media Vision” awards.  Joe, for many years, has continued his media work, served as a consultant to the Brevard Alzheimer’s Foundation and the Armed Forces Retirement Home, and was a member of the Brevard County Commission on Aging.  Joe, and his wife Terry, enjoy living in Brevard County Florida.